Occasionally I get asked by prospective customers how our Delinea Server Suite compares to a “free” offering such as Red Hat SSSD for the integration of Linux systems with Active Directory. Usually, this question pops up whenever a Linux OS vendor (e.g. Red Hat) introduces a new version of Linux (e.g. RHEL 7) that has a new or improved feature (e.g. SSSD) that claims “Improved Active Directory integration” in the “New Features” document for that release of the OS.

Having experienced this wave of inquiry every few years (e.g. search for “Active Directory” here for RHEL 5, here for RHEL 6, and here for RHEL 7), what I have typically seen is that in each wave these questions tend to die down a few months after the new OS release comes out when prospective customers either hear us describe the differences and/or realize after testing and researching the new Linux OS version that it is not sufficient from an AD integration perspective. I have always been meaning to get around to summarizing my answers in written form, hence this particular blog post, so hopefully, this blog post will help customers make a more informed choice vis a vis Linux to Active Directory options.

But before I jump into this, I know some of you may have come upon this blog post via a Google search and/or may not be familiar with Delinea or me, so you may not be sure if the person writing this is credible on this subject. I would like to think I am somewhat credible in discussing the topic for two reasons:  (a) I have been CEO of Delinea that has been building technology in this area for 10+ years, with on average more than 100 engineers per year working on this problem for a 10 year period (equaling 1000 man-years of effort and easily $75+ million in cumulative R&D spend); and (b) my company has more than 5,000 customers who have deployed our “Linux to AD” software on millions of servers to do just that (and more), so I have literally had hundreds of conversations with customers on this very topic. I certainly have my biases towards my company’s offerings, but per above am not a newbie on this topic, and will try to paint an objective picture.

What we have found is that "rolling your own" via using free stuff like SSSD can work for some users to do basic AD bridging/integration BUT only if (a) they have a very simple (i.e. non-complex) environment and relatively basic functional requirements and a relatively small scale environment, and (b) they are willing to put enough manpower and effort into it and have the appropriate skillset to make rolling their own work. In other words, we see something like SSSD for integrating Linux to Active Directory systems working only in environments where typically the customer has a small set of OS versions in a relatively small and “vanilla” environment, where they want only “authentication” versus “authentication & authorization & auditing” (the classic “Triple-A”s of secure access control), and where the business decision has been made to spend people resources building and maintaining an in-house Active Directory integration solution vs. spending time and money focusing on other things for the business.

Here’s a graphic that represents what I am saying in terms of what I think are the sweet spots for an SSSD or a Samba Winbind vis a vis Server Suite: 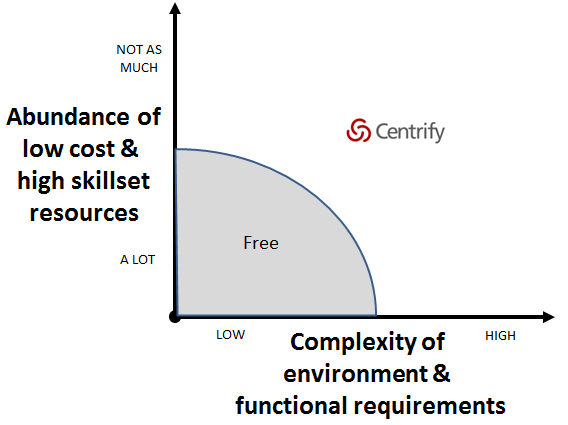 Let me go into detail on each axis of the graphic.

The complexity of the environment & functional requirements

If you have a complex environment and/or have complex functionality requirements, a freebie like an SSSD or a Samba Winbind will in all likelihood fall short. Here’s what I mean by “complexity” and why I make that claim:

Instead, Red Hat recommends for more than 30 systems you deploy a separate directory for Linux (their IDM solution, with the corresponding cost to purchase and deploy) and set up a trust relationship between that and AD. Which in effect is a recommendation that in a large-scale environment you actually NOT “AD Bridge” directly and get the benefits of identity consolidation (single password policy, a single place to provision/de-provision users, etc.), but instead set up a parallel directory. You may find this adds complexity and cost vs. simplifying things the way Delinea does by tying Linux systems into AD. So the resulting solution that they recommend requires duplicate directory infrastructure, processes, procedures, established synchronization, audit controls, automation, and management infrastructure.

This probably makes economic sense for Red Hat in that they want to sell you their own alternative products to Active Directory, so in my opinion, it is hard to see the motivation for them to deliver a truly high scale native/direct AD integration solution. Delinea’s approach is to allow customers the ability to use what they already have, i.e. leverage the existing AD environment for not just authentication but also for privilege management, reporting, and policy enforcement while allowing the customers to collapse redundant and duplicative processes and procedures, minimizing the number of points that need to be audited.  So a big philosophical difference and scalability are reflected in this difference.


I could list some more but hopefully, you get the feel.

Now let’s talk about that axis which I said “abundance of low cost and highly skilled resources.” What does that mean? Well, there is no doubt in my mind that there are a lot of smart people out there that can spend hours getting basic AD integration to work using something like SSSD. The question is how do you want to spend valuable (and often expensive) resources? Especially when there may be other projects that can be worked on since this problem has been solved in a comprehensive and cost-effective manner by a vendor such as Delinea.

What we have found is that most customers don’t have the expertise in building AD integration solutions or even if they do, they want to spend their time and money doing more strategic things. If you are fortunate (e.g. you are a college and have a bunch of interns and/or grad students), then certainly try a “free” solution out, as you have “A LOT” of talented people who are relatively low cost, but there are a few other things you should consider:

Clearly, there will always be an appeal of a “free” as in a new feature of a new version of an OS, but usually, customers quickly find out that it is “free“ as in “free puppies” — i.e. a lot of care and feeding is needed, and often this is ignored. Hopefully, this raises awareness for that aspect beyond the feature/function comparison.

So at the end of the day, it boils down to how/where you want to spend your time and money, and how big a need/concern is this for an organization, and how complex one's environment is. If you feel your environment could use a packaged solution, with a throat to choke in terms of tech support and updates, and you won't go beyond basic AD integration for *nix to include authorization and auditing, and/or you also want to go beyond *nix to Mac or Mobile or SaaS, etc., then I think we are a great choice for your Linux to Active Directory integration needs. 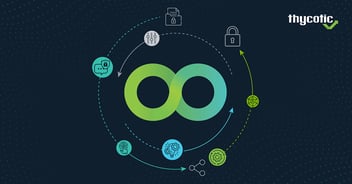 Cybersecurity and the Future of Connected Devices

Before I take you on a journey to the future of connected devices, let’s briefly reflect on...